Meningococcal Vaccine Side Effects Quite Serious, Linked to Neurological Disorders 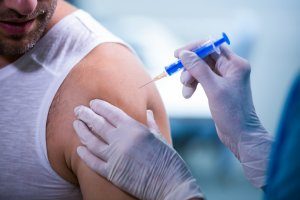 Do the Meningococcal vaccine risks outweigh the benefits? Meningococcal disease (meningitis) is a relatively rare bacterial illness that impacts the meninges of the brain and can lead to serious complications. The disease had been in decline for years before the CDC recommended the meningococcal vaccine for widespread use. The meningococcal vaccine's side effects are dire, including neurological disorders and death, particularly when given in conjunction with another vaccination. Most meningitis vaccinations do not create immunity against the most common bacterial strain responsible for the development of the illness, and those that do have shown limited effectiveness. Additionally, the suggested timing to vaccinate at age 11 or 12 is questionable considering that vaccine induced immunity only lasts two to five years while those at greatest risk are college students living in crowded dormitory situations.

A Disease in Decline Since 1998

Between 1998 and 2007, the number of reported meningitis cases decreased by 60 percent. Current statistics reveal an all time low of annual cases, with the CDC reporting 550 instances in 2013. Although the illness is fatal in approximately 10 percent of situations, it can be effectively treated with antibiotic therapy if initiated shortly after the onset of symptoms which are typically flu like in nature. While these statistics may seem alarming, it is important to compare them with the number of adverse events associated with the vaccination. It is also important to consider the fact that the vaccine itself does not protect against the most common strain of bacteria responsible for the meningitis illness.

A Host of Dangerous Meningococcal Vaccine Side Effects

A study published in Human Vaccines & Immunotherapeutics as well as documented research completed by the Southern California Permanente Medical Group in Pasadena, California have linked the quadrivalent meningitis vaccine with a nearly three fold risk in the development of neurological disorders such as Bell's palsy within 12 weeks following an initial vaccine dose. The dangers increase significantly when the meningitis vaccine is administered in conjunction with another vaccination, a situation that routinely occurs in the 11 to 12 year old adolescents who typically receive a dose of the meningitis vaccine alongside another CDC recommended vaccination against HPV. In 2007, a year after the release of the HPV vaccine known as Gardasil, the Vaccine Adverse Events Reporting System (VAERS) showed a 1000 percent increase in the number of cases of Guillain-Barre Syndrome (GBS) when HPV and meningitis vaccinations were administered on the same day.

Meningitis Vaccines Do Not Protect Against the Most Common Bacterial Strain

The original versions of the meningitis vaccination provide temporary immunity against the A, C, W-35 and Y strains of meningitis. Unfortunately, no protection is developed against the B strain which is responsible for half of all bacterial meningitis infections in adults and children over the age of five and 70 percent of all cases in young children. In 2016, the FDA approved a vaccination intended to produce antibodies against the B strain, yet limited effectiveness has been observed in practical applications, with more than one third of all patients failing to develop antibodies against this particular meningitis bacteria.

As of 2015, nearly 2000 serious adverse events following the meningitis vaccination were reported to VAERS; of these cases, 99 were deaths. Experts estimate that vaccine injuries reported to VAERS are chronically underreported and likely represent anywhere from one to ten percent of the actual cases which occur nationwide. Taking the conservative estimate, if ten percent of all adverse events are reported, this translates to nearly 1000 deaths associated with the meningitis vaccination over the course of roughly 15 years. In comparison, the CDC reported 550 actual cases of meningitis in 2013; if ten percent of these cases were fatal, this translates to 55 deaths per year, or 825 deaths in 15 years. Do the benefits outweigh the risks of the meningococcal vaccine side effects?

The CDC recommends that all 11 or 12 year olds receive a dose of the meningitis vaccine and another booster at age 16. Considering that adolescents are at a relatively low risk of contracting meningitis, why is this vaccination, which typically results in immunity against four strains of this bacterial illness for a mere two to five years, being recommended at this point in a child's life? College students living in dormitories or others in close quarters are at a much higher risk, yet any immunity conveyed from the earlier two vaccination doses would no longer be present when young adults enter this stage of life. College freshmen are advised to receive another dose of the meningitis vaccine, yet logic behind the previous two is difficult to follow, particularly considering the associated risks and relatively high cost of this vaccination. Many feel there is ample evidence linking big pharmaceutical companies to corrupt practices which expose countless consumers to undue risks while producing an enormous profit margin for these corporate giants. Individuals who have been harmed by the meningitis vaccination are eligible to pursue compensation through the federal Vaccine Injury Compensation Program (VICP).